I am still on the couch!  And apparently I am still writing!

I have just finished ripping little bits of duct tape off it’s roll and pressing them over the multitudinous little lights emanating from the various gadgetry dotted around the studio.  The TV, the microwave, the VCR, the CD, the I-don’t-even-know-what-that-thing-is, the carbon monoxide detector, the oven.  There was also the taping of a large, thick, brown blanket over the window.  Let it be known that not one tiniest dot of light will be visible in this room tonight.  My brain has become incredibly sensitive to light at night, and unless I sleep in complete darkness there is no sleep.  It wasn’t until I settled under the covers last night that I realized that I had failed to plan for the whole sleeping part of this trip.  What with the light sneaking around the slats in the window blind, the glow sliding under the door from the hallway, and the sum of all those little red and green LED lights, you could have successfully landed a plane in this space last night.  I abandoned the idea of 5 pillows over my head when breathing became a little problematic and made do with ducking my head under the covers as far as I could without shutting off the flow of oxygen.  Nonetheless my eyes flew wide open just before 4 am with the first evidences that daylight was on its way.  Not entirely the blissfully peaceful, restful night at the beach I had envisioned.  Tonight, I am ready.  I am duct taped, blanketed, and cushioned.

Since the test results started rolling in at the end of August I have used up an inordinate amount of brain energy fitting puzzle pieces together and trying to figure out The Thing that started this cascade of symptoms resulting in my being almost non-functional in early July.  I’ve thought back across the preceding 9 months so many times analyzing every little thing that changed anywhere in my life that may have led to my body’s downward spiral.

I couldn’t pinpoint anything related to diet although heaven knows I did rewind on every single thing I could remember putting in my mouth since last Thanksgiving.  I had stopped doing my eccentric exercise around the start of December when I first started to feel ‘off’, but surely that wouldn’t have caused me to put on 19lbs in a month.  A colleague at work had started being extremely unpleasant around the middle of October which I became significantly stressed over.  Was it possible that stress was at the root of my physical woes?  I mean I know stress can do all sorts of damage, but all this?  Really?

So if it wasn’t food, exercise, or stress, what was it?  WTF was wrong with me?  And why wasn’t my fabulously healthy diet fixing it?  It got to the point where it seemed like I may as well just eat whatever the hell I felt like since it didn’t seem to make any difference to my body – all this real whole food and I still felt like complete crap, with all the symptoms that suggested I was eating a hideously awful diet comprised of a revolving buffet of Krispy Kremes, pizza, and potato skins loaded with mac ‘n’ cheese washed down with gallons of coca cola and Starbucks Salted Caramel lattes, while snacking on Girl Scout cookies by the box.

When I first met my ND and we went over the blood results things started to plop into place.  As soon as I saw the mammoth list of food sensitivities and nutritional deficiencies I knew I had Leaky Gut.  I had read about Leaky Gut back in my early 20’s when I first started having gut issues:  “Wow, that was a wonderful plate of pasta!  OH. Hey, where’s the bathroom?”  “When am I due? Oh, no, I’m not pregnant, I just just ate 2 slices of pizza.”  Back in my early 2o’s though Naturopaths – in England anyway – were regarded as freaky weirdos who only freaky weirdos with lots of money could afford to go see.  I may well have met the freaky weirdo criteria, but if it wasn’t covered under the National Health Service I wasn’t getting an appointment.  I read a lot, self-supplemented, tried things out to see what would happen, but I never managed to string the whole story together.

This time we knew I had Leaky Gut and we knew the damage had been caused by an E.Coli infection, but I was still hellbent on figuring out what had lead to the E.Coli infection moving on in.  Knowledge is power, and I sure didn’t want to be going through this again.  Ever.

One day back in mid-September Wildman floated the idea of taking a road trip to see Mt. St. Helens.  He had never been and I would never turn down an opportunity to drive up a volcano.  I have 5 within easy striking distance from my house.  Every one’s a winner. 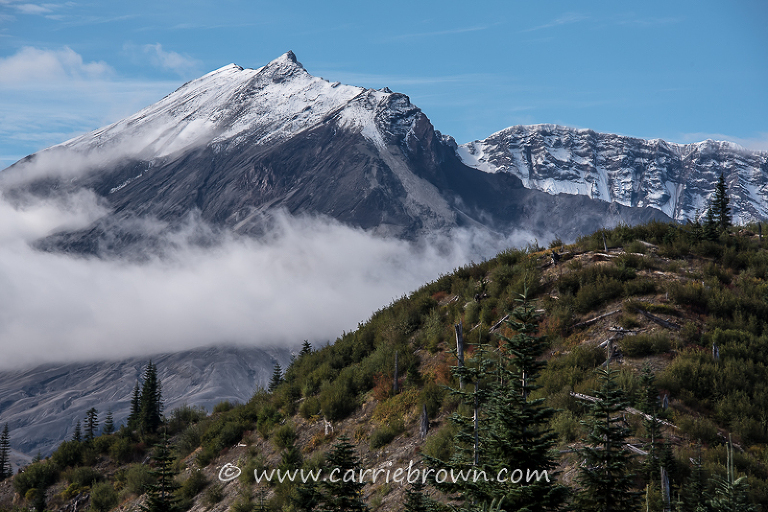 It was a gorgeously warm and sunny Sunday as we headed south down the back roads.  I was only a couple weeks into my treatment plan and was still pretty tired, so Wildman took the wheel and I provided comedic relief and a full tank of gas.  I was regaling the week’s science experiment stories including what happened when I drank roasted dandelion root and how hazelnuts made me throw up.  We shared hypotheses on what stimulant was connected to what symptom and how it might all fit together.

As I was rambling on, thinking out loud about what might have changed 10 months before that got me all E.Coli’d out and it suddenly hit me.  Maybe it was being half way up the side of a volcano that did it.  Back last December I was in between volcanoes when I figured out what had caused my hair to start smelling like a wet dog.  And BINGO.  It was the same thing.  The same thing!  And shame on me for not thinking harder and being more vigilant back at the end of last year.  I know better.

The offender?  Antibiotics.  At the end of last November I had two courses of antibiotics in quick succession for a double ear infection and an abscess on the roof of my mouth.  BAM.  The infections were gone, along with every good bug in my gut.  Like a volcano after it blows or after dropping a bomb – it takes a while for the good stuff to grow back.  In that space E.Coli saw a chance, moved on in and took hold.

WAIT.  What??  One mystery solved?  There’s more?  Turns out there are two things causing mayhem.

Next up: the second indictment.