Out From Under A Rock

I didn’t think I’d been living under a rock the last 10 years, although I did spend 4 ½ of them in Spokane, which I’ve heard some say is akin to the same thing.  There’s a lot of things I miss about Spokane.  The weather & The Brickhouse Massage & Coffee Bar are two of them.  However, back to the rock…I am now wondering if at least that part of my brain that thinks about chocolate has indeed been living under it.  When I first arrived stateside there was an absolute dearth of even ok chocolate, let alone great chocolate.  I daydreamed about eating a slab of rich, dark, melty smoothness.  I’d scan the shelves in every food store I went near, just in case.  Every time I spied a bar or a box of chocolate that had clearly come from anywhere in Europe I set upon it like shoppers descend on Wal-Mart & Best Buy at 5 am on Black Friday.

Who’s heard of B.T.McElrath?  Hands up!  Come on, hands up, don’t be shy.  I hadn’t.  Until yesterday.  Aimlessly wandering the aisles in Whole Foods when I found myself with 45 minutes to kill before an appointment (you know I have a penchant for being early) I was suddenly faced with a veritable wall of chocolate bars.  And {very} disturbingly enough for a chocolatier, I didn’t recognise a lot of them.  Clearly I need to get out more.  I’ve been shipping 3 kilo bags of Valrhona Caraibe 66% couverture over from France for years to fuel my chocolate fantasies, in the {apparently mistaken} belief that there was no good chocolate on this side of the pond.  Well when I got here 10 years ago there wasn’t.  Seems that has changed somewhat.

Is it just little ol’ me or is the world moving along at such a clip these days that you can just miss stuff?  Like lots of stuff.  And before you know it you walk into the grocery store and hardly recognise a thing in there.  Except in the produce department; and even then, every once in a while there’s a curious looking vegetable camped out under the misters. 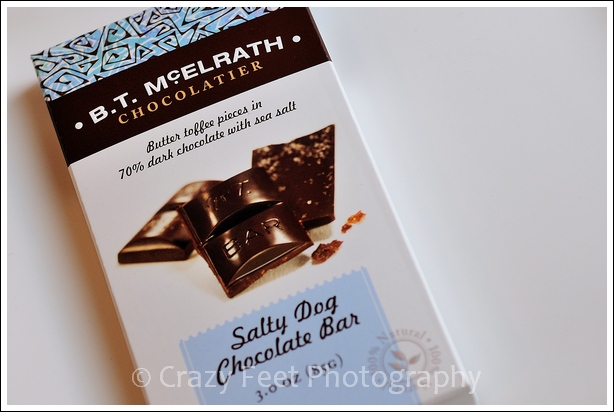 It was the “Salty Dog” part of the box that reached out & grabbed me.  I just adore the whole caramel sea-salt thing.  Now 70% is typically a tad, just a *wee* bit too dark for me.  My cocoa taste-buds usually hover between 62 – 66%.  Given that this one had butter toffee pieces in it though, I decided to give it a whirl.

First off, I just loved the little bag inside.  It was like a little sleeping bag.  I mean you could just shove that in a corner of your purse and it would still be perfectly intact later.  With no mess.  Can you do that with foil wrapped chocolate?  Not so much. 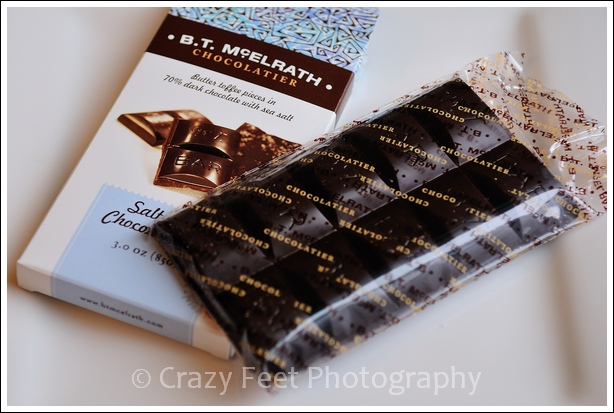 Mercy.  Can we stop yakking already & get on with the *devouring* part?  Brian {McElrath} ingeniously made this a two-sided bar of chocolate.  If you ask me it’s pretty darned clever.  If you read the box it will tell you that you have a choice about how you can eat it & that it will actually taste different.  Yeah, right.  No, really.  They are right.  Put it in your mouth with the salt-side up for a deep, dark, rich smoothness that gradually introduces tiny pieces of crunchy toffee & intense sea-salt.  But put it in your mouth salt-side down & you start with the unexpected shock of gritty saltiness followed by an increasingly mellow blend of chocolate and caramel.

I really enjoyed this bar.  I ate almost all of it salt-side up, preferring the sweet creaminess first & the salt as the secondary flavor.  I have to say though, it was nice to have a choice and pop a piece in salt-side down every once in a while. 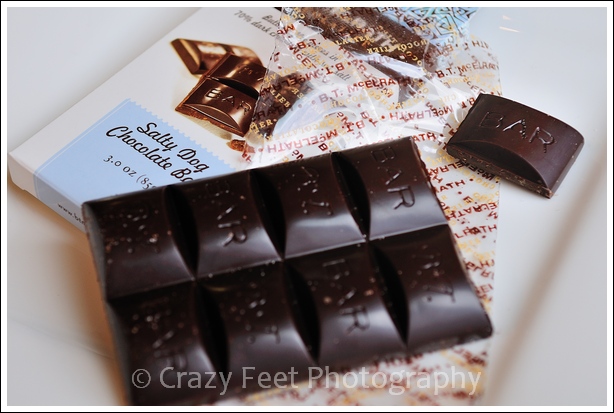 If you, like me,  like the whole caramel sea-salt thing you might just want to grab one of these next time you’re up for a little chocolate treat.  They also make a milk chocolate version of the Salty Dog, called the Prairie Dog which includes almonds in the mix.