Natasha Reed, you made me want to eat cookies.  This is all your fault.  I have resisted thus far, but this morning, standing in line in front of Cafe Besalu’s counter being stared down by at least 5 different cookies I found myself completely unable to abdicate my desire any longer. Given that I come from the land of the biscuit (cookie) where we’ve been making them since like the 14th century, they were a big part of my childhood.  I grew up surrounded by the things.  Everyone in England does.  Packets & packets of them.  Just ask my mother, the consummate biscuit muncher.  At every supermarket (grocery store) there will be an entire aisle devoted to them.  We just love us some biscuits (cookies).  And, because we’ve been making them for so darned long, we’re pretty darned good at them.  They were invented back in the dark ages to feed sailors who were out at sea for months on end since they had a long self-life & were cheap to produce.  The biscuits not the sailors.  Back in those days biscuits were called hardtack & were baked 4 times to make sure they were really dry so they could last a really long time.  Sailors used to dunk them in their tea to soften them before they ate them, a tradition that still carries on in England today when eating certain type of biscuits – Digestives, Rich Tea & Gingernuts – to name a few.  Oh mercy.  Now I want a Digestive Biscuit & Cheese Sandwich.  Sigh. 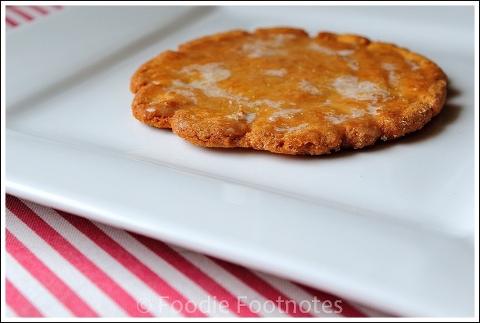 Anyway, my point was that when I came stateside I pretty much stopped eating cookies (biscuits) because, well, I’ve been rather spoiled having grown up eating fantastic biscuits (cookies) for eons.  And if I do get an occasional urge I swing by Cost Plus & pick up a packet of McVities Chocolate Digestives or Fruit Shortcakes.  Maybe though, if I tried some fresh cookies from a bakery instead of a packet from a grocery store it would all go better. 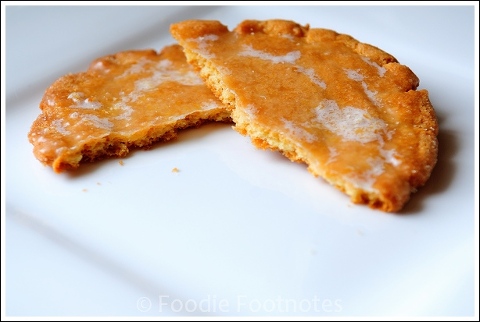 It did go better.  But…I bet you knew there was a “but” coming.  I love the taste of lemon.  I made Lemon Cookies a year or so ago that were a *huge* hit.  So lemon-y they almost made you pucker yer lips.  I was dreaming that this {very large} Lemon Cookie from Cafe Besalu would be just like them.  It wasn’t.  The flavor was very pale and not terribly lemon-y at all.  I mean, I knew it was lemon but it wasn’t reach-out-&-smack-me-in-the-taste-buds lemon.  The texture was neither crispy nor soft, when from it’s appearance I was most definitely expecting crispy.  Nice, but not nice enough to make me drive to Ballard to get another one.

Having already been railroaded at the counter by The Big Lemon Cookie, I still needed to get what I really came to Cafe Besalu for:  a Croissant or a Pain au Chocolat.  I went with the Pain au Chocolat. 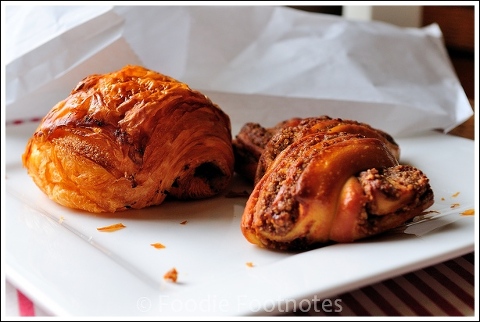 And, because I was forced to stand in line in front of the display case for a few minutes longer than my pastry-loving brain could handle, by the time it came to my turn at the cash register I found myself asking for a Hazelnut Twist as well.  You gotta admit – it’s a {very} fine looking pastry if ever there was one. 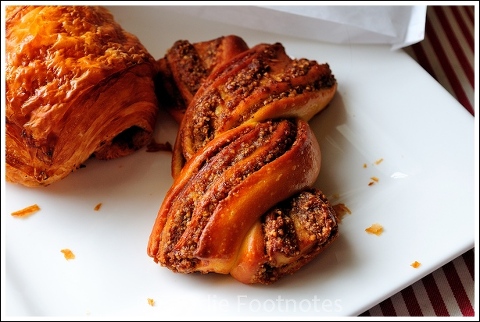 The Hazelnut Twist was an interesting one.  Lovely light, even texture.  Beautifully glazed, perfectly formed.  But…I bet you knew there was a “but” coming.  The flavor wasn’t as hazel-nutty as I was hoping.  Is there something just out of whack with my taste-buds today?  Is it me? 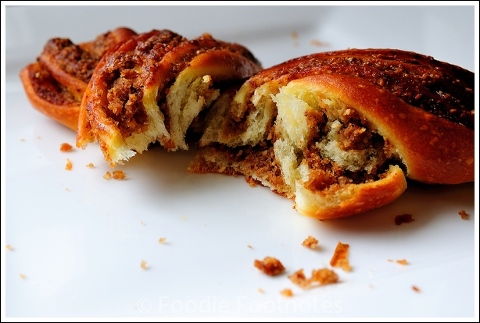 My Pastry of the Day award definitely went to the Pain au Chocolat.  Fantastically crisp & flaky on the outside & through the first few layers.  Bit doughy in the middle and ever-so-slightly over-baked.  Honore still wears the crown in my little black pastry book.

I am jealous.  Mr. Nyheim (oh beloved boss) gets to go to Paris for the week next week.  He’ll be eating the real thing.  I’ll just be dreaming about it.