One Tasty Hunk of Meat

I have a great friend who lives in Kazakhstan, which, by the way, is the 9th largest country in the world & bigger than Western Europe.  Who knew?  I affectionately call this friend “The T-Shirt”.  (You can just go ahead and figure out how he came to have that nickname yourself.)   I love it when The T-Shirt shows up.  He gets over to the US 3 or 4 times a year, and every time he does he brings me chocolate, we go out to eat & we put the world to rights; or at least our respective little corners of it.

This time the remit for dinner was “I’ll have been hiking all day so I’ll be hungry as a wolf.”  Sounds to me like a cry for steak if ever I heard one.  There’s no lack of smart steakhouses in Bellevue – Daniels, El Gaucho, Ruth’s Chris, John Howie – but I just thought it would be fun to head somewhere different – something more casual, less pretentious, less spendy.  Plus it’s always fun, when you’ve a foreigner in tow, to head off into a new part of town that they might not have experienced before.  So off we went to West Seattle.  I mean, who takes tourists to West Seattle?  Alki, yes.  West Seattle, not so much.

I’d heard that Jak’s Grill was the place for steaks outside of the Big 4 super-spendy, super-schmoozy steakhouses.  So off to Jak’s we went, once we’d managed to escape the traffic mayhem that was clogging up Bellevue good and proper this afternoon. 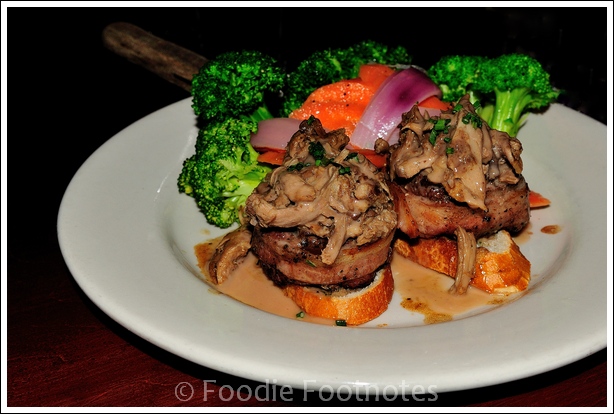 I read that Jak’s regularly gets completely slammed at the weekends, from the second that the doors swing open.  I was also wondering how parking would be on California Avenue.  California Avenue can be a particularly trying place to find a spot on.  I was worrying needlessly.  We only had to do one turn of the block before we nipped into a parking space & the rush at Jak’s had not  yet begun.  As I picked up the Specials menu my eyes immediately alighted upon the Steak Noelle: 2 small filet mignons wrapped in bacon & topped with braised duck on fresh baguette.  Come again?  Filet with duck meat on top??  You’re pulling my leg!  No?  You’re not pulling my leg??

The steaks come with a big old salad & an entire field of broccoli, plus a couple carrots.  We were unaware on the broccoli field bit until our plates arrived.  I might not have ordered this enormous dish of Mac ‘n’ Cheese had I known. 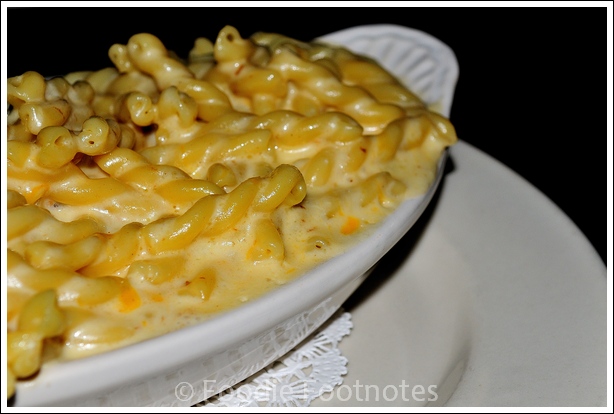 OK, you’re right.  I probably still would have.  The Mac ‘n’ Cheese was super-cheesey, super-stringy, super-tasty.  Luckily for me, The T-Shirt didn’t even want to share.  I am certain that his self-control in not partaking of things like Mac ‘n’ Cheese has contributed to his nickname being what it is.  I, however, being a girl, have no desire to ever earn the nickname The T-Shirt.  I do sometimes wish that I had a little more self-control in the ordering department though, but not too often.

The steak was a surprise.  I learned that duck does not belong on top of steak.  Not because both on their own they weren’t delicious, but because the duck over-powered the steak.  I wanted to know whether Jaks do, in fact, have the best steak around.  I still don’t know that because the duck was so ducky that I could almost have forgotten that I was eating a piece of steak.

The field of broccoli & the couple carrots were more, shall we say, blanched than cooked.  Crisp vegetables are good, but these were almost as crunchy as raw ones.  However, all those veggies, along with the big old salad sure helped that hunk of meat go down easier.

The service was fast, furious, efficient & friendly.  With a bit of sass on the side.  The restaurant itself is cavernous, stretching back for what seemed like several thousand feet.  I totally get why all the servers are skinny – they must clock up a serious number of miles every night.  The ambiance was just what I’d imagined from their website – large, comfy booths spaced to make you feel like you were the only ones there, low lighting & smart, sophisticated decor.

Jak’s was good: large amounts of good food, convivial atmosphere, reasonable prices.  Oh and I just realized that Jak’s do brunch on the weekends.  I am so there.  But I do have one question.  Why do all steakhouses insist on playing Frank Sinatra?