I’m tired.  It’s been a long week, and it’s only Wednesday morning.  It feels like Friday.  Last week’s Friday Night Dinner seems like a whole week ago.  I am still trying to fathom out how so many days slipped past without me getting this post up.

The Friday Night Dinner was a complete experiment, encouraged by the success of this Friday Night Dinner side, from a few weeks ago.  I didn’t need much encouragement.  If cauliflower could totally replace rice, what on earth would happen if we found something to replace tagliatelle or spaghetti??  We could change the world.  Or at least make it all more manageable when we needed a pasta fix but didn’t want to turn into a hippo in the process.  We’d change the world, I tell you!

So I came up with a dastardly scheme to make Spaghetti Carbonara.  With no spaghetti. 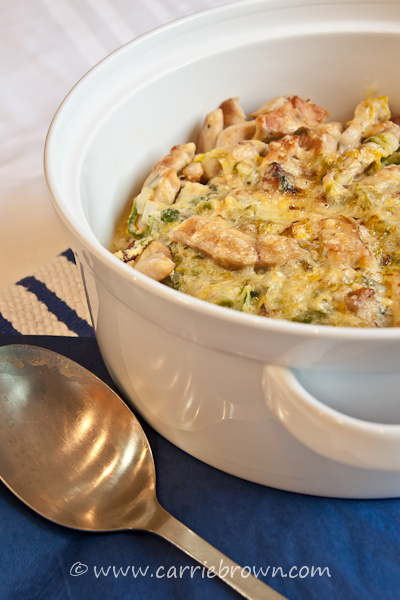 I used Napa Cabbage because it looks the most like tagliatelle or spaghetti when thinly sliced crosswise.  Napa Cabbage also has a more delicate flavor then other cabbages, which seemed like it would work better when masquerading as a pasta imposter.  I used one of the most well-known pasta sauces as a base so that there would be something familiar to the taste buds.  And then I added a decent chunk of chicken because just changing the pasta to cabbage still wouldn’t make it *SANE.  *SANEr, for sure, but for some real *SANEity, it needed more protein.  And chicken starts with a “c”, so chicken it was.  Yes.  I really did pick the protein because of the first letter of its name.  Sometimes, that’s as good a reason as any.

It turned out rather well.  It didn’t look as much like Spaghetti Carbonara as I had dreamed it would; and it didn’t have the same texture as pasta – but it was very tasty and more way more filling.  Farmer Becky and The Big Guy loved it, but then it did have bacon in it.  I’ve fiddled with the recipe since I made it, to make it simpler and easier to cook.  Give it a whirl and see if it fixes your pasta cravings. 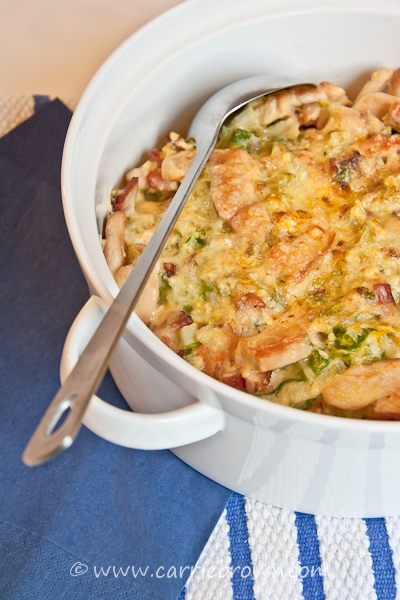 I made Gazpacho Salad to go with it – a big salad with big flavor, but any number of salads would do the trick here.  Given the large amount of cabbage in the main dish, I would suggest serving a salad that was mainly other veggies, rather than lettuce, just to mix it up.  There is an insane amount of cabbage in this dish – you’ll totally trick any non-veggie lovers into consuming vast quantities of the green stuff without realizing it.  The *SANEity quotient of this dish is huge.  We love that.

If you read the Gazpacho Salad post you’ll know that we were all exhausted.  I blame that for my creativity-lacking shots.  Sorry about that.  It looks much better in real life.  Rustle up a casserole dish for yourself, you’ll see.