I started writing this post from Nebraska, although a few minutes later I think I was in another state entirely. I was sitting on a 737-800, and I had quite the view from up there out of that little rectangularly oval piece of plastic. I could peer out past bunches of fluffy white clouds at the parched fields & squiggly roads below. I love to do that. Mini-Me was next to me, eating tangerines and being jolly. It was decidedly odd being on a flight with someone I knew. I can count the number of times that has happened – in my life – on one hand. *Maybe* two hands. Then Mini-Me went to sleep. She’s pretty easy to travel next to.

It used to be that plane time = peace. Unless you were sitting next to a mother with any number of small children, or in an aisle seat next to someone with bladder control issues. Peace as in being disconnected from the outside world. No cell phone ringing. No text messages beeping. No email demanding attention. It was the perfect excuse to read a book, do Sudoku puzzles, or nap, without any fear of criticism from your boss, your spouse or your mother. People just understood that being on a plane precluded you from doing. Getting on a flight meant enforced downtime. Nowadays…not so much. “I’ll be on a plane” is no longer a valid excuse for being out of touch or not getting stuff done. Have a laptop? Your plane likely has wi-fi. Bam! You’re connected. And so the world has invaded one of the last bastions of enforced dozing and movie watching. Drat.

On the other hand, I can now blog. From a plane! 30,000 ft in the air!! Damn, technology is amazing. Except, when am I ever going to do another Sudoku puzzle?? Planes without wi-fi are underrated.

Which all got me thinking about other underrated things. I made a list, while I sat there buckled into that metal canister hurtling through the air towards Georgia, skirting around enormous, angry thunder clouds that would have given us quite the bumpy ride if our lovely Captain hadn’t dodged and dived to find us a smooth path. Bless him.

And then yesterday I had an impromptu pastry picnic at Hamilton Park, and I have determined that these too are entirely underrated. 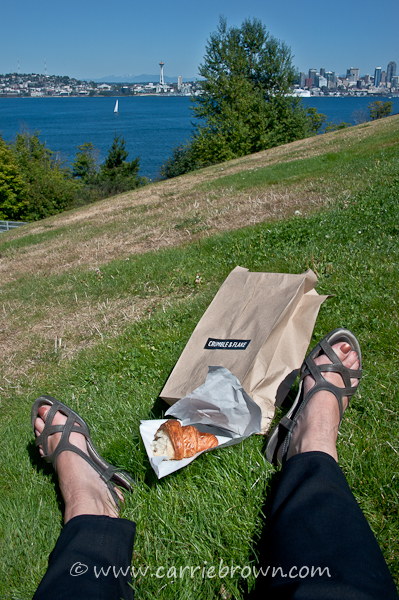