Two boys, one girl & a pile of eggs

Travis!!!  Get here already so we can go EAT!  Since I’d been up for hours I was {completely} famished.  We all met at Shawn’s place…me having just enjoyed a spectacularly beautiful sunrise drive in from Tucson & Travis zooming over from the west-side.  Or whatever they call it in Phoenix.  From over there somewhere, anyway.

Our drive over to T.C.Eggingtons was a total team effort:  I provided the address, Travis drove & Shawn directed.  Woohoo!  We only did one U-turn.  Or was it three?  Once we got on the right side of the freeway everything got a lot easier.  We were laughing so much en route I am surprised we got there at all.

There was a line.  At least the line was only inside the building when we arrived.  By the time we left there was a whole gaggle of folks waiting out on the sidewalk too.

This was totally an UrbanSpoon Mesa pick.  What tickles me is that this #1 brunch spot is a 10 minute drive from Shawn’s house, but he’d never been.  Seems it takes the little English girl who lives in Seattle to figure out where to go to find a hot breakfast spot in Mesa, AZ :-)  (Hi Shawn!  Love you!)

We huddled in the lobby for a few moments with a horde of other hungry breakfast-goers until the charming gentleman running the front desk suggested that if we sat outside on the patio it would all go a lot quicker.  Hey!  Great idea.  Being outside we could also laugh loudly & more obnoxiously without disturbing anyone elses early morning nirvana.  It was a tad chilly on the patio, so they cranked up the patio heater for us.  With the sun warming up in the cloudless blue sky it was perfect.

The hot chocolate was the usual disappointment.  Why do I do this to myself?  Am I the only person around who thinks that hot chocolate should taste of, well, chocolate?  And that “whipped topping” is just an abomination.  Sigh.  Shawn had a very yummy strawberry smoothie thing which got passed around the table of couple of times & Travis went with a cup of coffee.  No clue how the coffee worked out.  (Chime in any time Trav!)

We were so busy talking & laughing (again) that it needed several promptings from our tireless server to get us to order some food.  Then it all got a bit tricky.  Huge menu.  Here’s part 2 of it.  So many choices.  The menu came with a large piece of chicken wire for a front cover.  Cute. 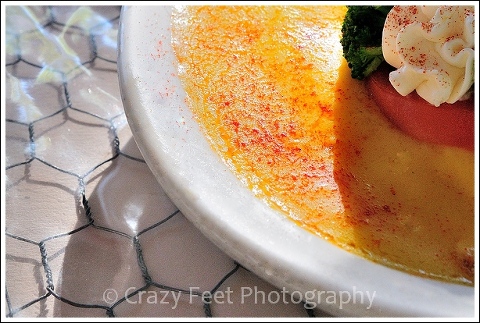 What to eat?  It all sounded so good.  A little help from our long-suffering server resulted in 3 omelettes heading towards our laughter-filled table.  O’Pear Grenache for Shawn, Greek Fetash for Travis & The Eggington for me.  Good names for omelettes.  Plus Shawn ordered an enormous plate of something titled: English Toast with a French Flair.  Reminded me that we met in England. 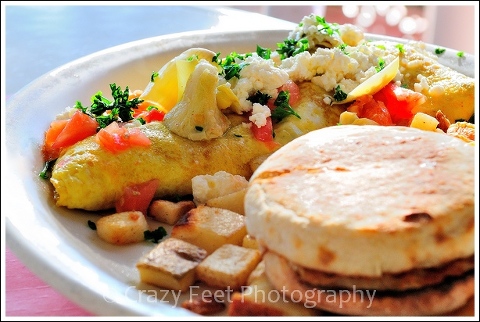 While we were waiting for our omelettes the conversation & laughter fired up again.  We broke one of the cardinal rules of conversation:  don’t discuss politics or religion.  I am sure the rule doesn’t apply when you all love each other as much as we do.  So we went ahead & had a wildly spirited conversation about religion.  We even felt the need to apologize to our neighboring omelette-eaters.  Ooooops.

Our energetic religious exchange helped us work up quite an appetite & the omelettes went down fast & furious with us all sharing mouthfuls of each others plates.  It was quite the omelette-fest. 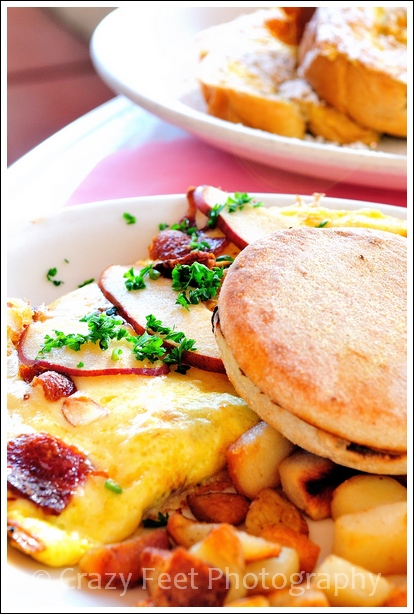 The omelettes were delicious: the fillings were interesting combinations of ingredients that none of us had tried before.  I am not sure which omelette I liked best, but I do know that there were choruses of “yums” repeatedly around the table until the plates were clean. 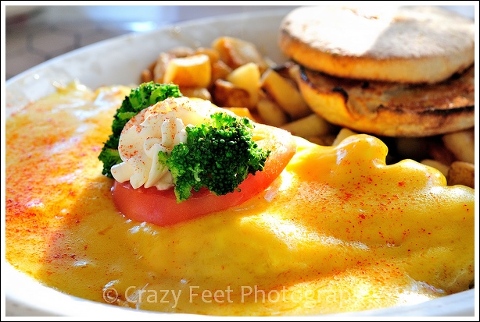 The Parlor Potatoes were lovely.  The muffin was…actually, I don’t know.  I wasn’t in a muffin mood so I sent it packing back to the kitchen.   I am sure it was a very lovely muffin.

The French Toast was where it went a bit sideways for me.  And it wasn’t the French Toast that was wrong.  It was what they served it with.  One word: margarine.  Enough said.  I was seriously surprised though.  Such a shame.  One bite & that went the same way as the muffin, just not for the same reason.

This was a most splendid breakfast & I would suggest that you brave the line to get some eggy, yummy appetite-busters for yourself.  Great omelettes, lovely ambiance, friendly efficient service.  You might not get the same witty, scintillating banter that the Waldron boys dish up at every opportunity, but I am certain that you will have a most delightful breakfast at T.C.Eggingtons.

1 comment
« Seemingly Endless
A {culinary} fork in the road »