I’d never eaten Thai food until December 20th, 2010; a mere 8 weeks ago.  Now I’ve just eaten Thai for the 3rd time.  And what’s more, I have finally eaten at Wild Ginger.  Hurrah!  I give total credit to my mate, JC.  Oh & just to clarify…the term “mate” when used by a Brit (or an Aussie) is slang for “friend”.  No need for anyone to get alarmed or start getting worked up into a lather now.

JC had been in Seattle all week long for some Techy gig downtown put on by those lovely folks at Microsoft.  He really lives in Australia somewhere & was heading back there the next day.  I think he still had jet-lag from arriving.  Maybe when he gets back home it will all catch up & he’ll feel like he never went anywhere.  Did I ever tell you that I don’t believe in jet-lag?  That is to say, I’ve never had it, so in my little world it simply doesn’t exist.  When I get on a plane to anywhere I set my watch to the local time of wherever the heck it is I’m headed and then behave like that’s the real time.  When I get off the plane my brain is already thinking locally so I just carry on doing what I *should* be doing at that time of day.  If it’s dinner time I eat dinner.  If it’s bed time I go to bed.  If it’s 11 am I stay up for another 10 or so hours, just like I would at home.  Hey Presto.  No jet-lag.

Anyway, I digress.  My time with JC was really all about the talking rather than the eating.  It didn’t hurt my feelings any that we did that talking over the bar at Wild Ginger.  Wild Ginger has an astounding reputation.   7 pm on a Friday night and the place was packed.  The place is also gigantic.  I am certain that they must regularly lose some diners in there.  There was not an empty table is sight, so we headed for the bar.  Given that I am still almost a Thai virgin I handed over all ordering responsibilities to JC.  Except for the drink.  Grapefruit juice for me.  And boy, let me tell you, I didn’t just get juice, I got half the grapefruit too.  It came with an awful lot of juicy bits.  I’d go so far as to say that Wild Ginger’s grapefruit juice is the juice world’s equivalent of double-stuffed Oreos.  I had my little glass re-filled several times.

JC deliberated over the food for quite a while, I think much to the chagrin of our bartender.  You see, we were just too engaged in the whole talking thing.  We’d last seen each other for about 7 minutes in Atlanta last summer and then for maybe 13 minutes the summer before.  Also in Atlanta.  So all-in-all it was a couple of years since we’d had a really good pie-jaw.  It was long overdue. 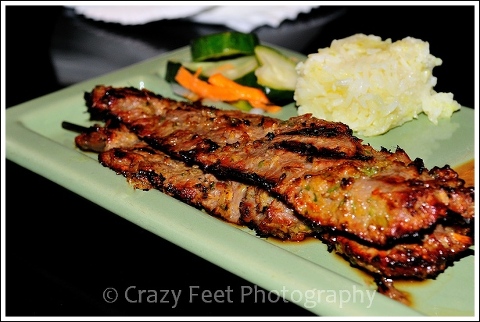 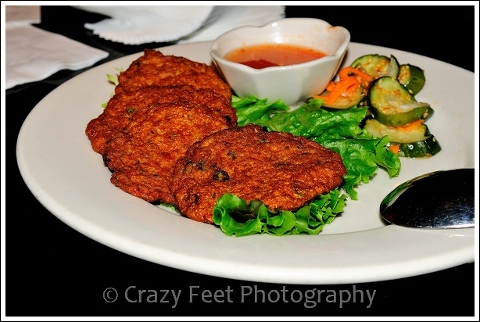 JC pre-warned me that the fishcakes were going to be chewy.  It helps to have someone who knows Thai food to tell you what you can expect.  Otherwise I would have just put them down as rubbery.  Knowing that they were meant to be that way & that they were good fish cakes was all part of my Thai Education Class.  I might not be *meant* to say this, but I especially enjoyed the pickled cucumbers that came on the side.

We had a little break from eating while JC perused the menu for some more treats.  If only we could just stop talking for a few minutes & let the poor man concentrate. 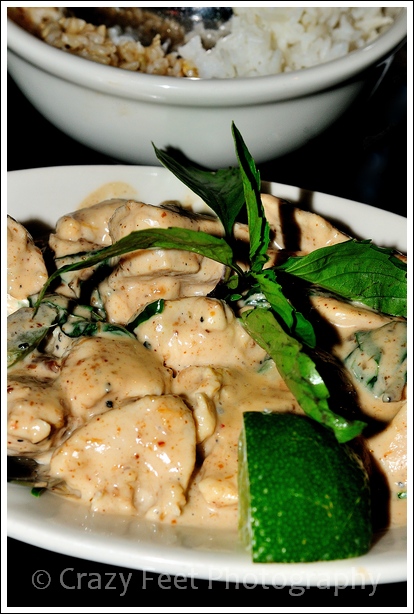 Now this is where it all started to get rather exciting for my tastebuds.  There was something in that curry that had the exact same flavor as my cherished Tom Ka Gai.  I don’t know what it was.  I know they both have coconut milk in, but I am sure that flavor ain’t coconut.  Not like any coconut I’ve ever tasted if it is!  There must be some spices not listed that are common to both.  And scary as curry is to me (my spice-o-meter starts going clang, clang, clang at even a hint of heat) I could quite easily have devoured the whole plate.  JC, being the utter gent that he is let me eat most of it.  Especially when I thought my mouth was going to spontaneously combust upon eating one of these: 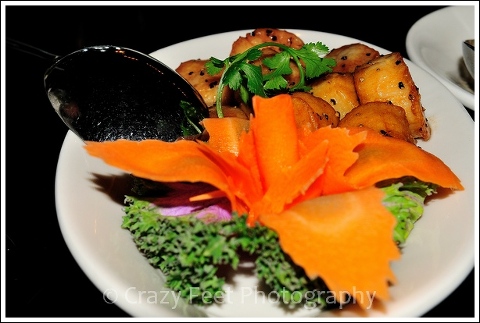 JC laughed at me.  And honestly, who can blame him?  It was after all, just pepper that was causing the fire alarm in my mouth.  The scallops were beautifully cooked & had they been a little less peppery I would’ve eaten more.

I must admit I don’t feel quite right about this “review”.  We really were doing so much verbal catching up that the food was a means to an end rather than the highlight of the evening.  But, on the other hand, when you’ve recently become a Dad & you have the most adorable baby girl on planet earth, it can be hard to stay focused on grub.

We languished at that bar for over 3 hours before JC walked me to my car.  Ever the gentleman, our JC.  He tells me that next time we’re going to have a bowl of Vietnamese Beef Pho Soup.  There you go stretching my culinary boundaries again.

Hey, I’ll try anything once.

0 comments
« Before the Green Scrubs & Short Wellies
Deeply, and in key »