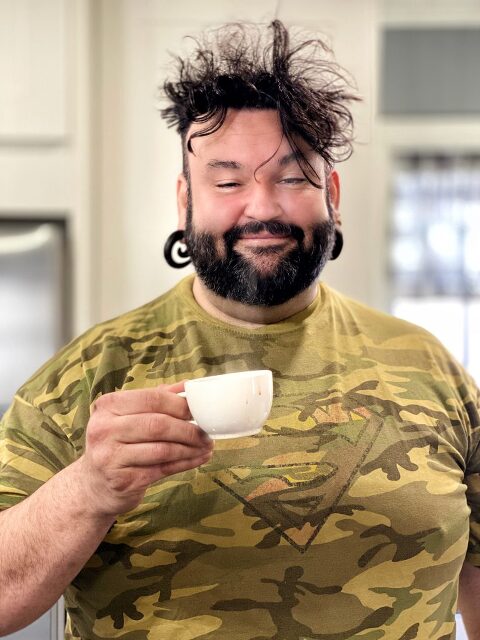 Yogi Parker: I am from the far off mythical isle of Ohio, but I escaped and lived in the state of California for most of my life. I played a lot of high contact sports, like football and rugby. I’ve done a bit of traveling in my life, and accidentally lived in the Philippines for a couple years. I really like lumpia.

I’ve had many jobs in my life – mainly working in non-profits – but I’ve also worked as a bouncer, personal security (main assignment – stand there and look scary – which isn’t very hard when you’re 6’7″, weigh 410lb, have a head full of dreadlocks and a face full of beard), scientific diver, surf instructor, and even did a stint as a pro-wrestler.  Sadly the Pro-wrestling ended after getting hit by a car.

Most recently I worked as a 24*7 truck driver rolling around the country with my twenty pound attack Gerbil JoJo (they said she was a dog but I’m not so sure) and a kitten I found in the bumper of the truck, who I appropriately named Bumper.

I’ve always liked cooking and I taught myself how to do fundamental cooking while on camp / surf / dive trips, and from watching food shows. When I became a trucker, I adapted the camp cooking skills for the truck so I could eat healthier, have a better control on my budget, and avoid things like price gauging and food poisoning from truck stops. Food poisoning while being a truck driver is not as fun as it sounds, especially when you have to drive long distances without bathroom access.

I learned about Keto through a trucking radio show called Destination Health, thought it was bupkis, but decided to try it anyway because it was supposedly good for brain health, and I was experiencing some brain issues that were very similar to the symptoms of CTE (Chronic Traumatic Encephalopathy), and it was making me a bit nervous. Keto worked! My symptoms of severe brain fog, short term memory loss, depression and spiraling out of control emotions went away, and to top it all off, I went from 560 lbs to 330lbs of body weight while still being sedentary for most of the day driving. My energy levels skyrocketed and sleep quality dramatically improved! Go, me!

So, I got hooked nasty on the keto because of the results, plus the tasty food. I started studying more about nutrition and posting keto food pics and recipes online. This led me to meet a crazy supercalifragilistic British blond lady, who is a totally awesome trained pastry chef who actually liked what I was doing. Eventually – and thankfully – she shanghaied me out of the truck and we are now doing awesome stuff together right here on this website, on YouTube, on Facebook, in Cookbooks, on Patreon, and all the other places.

I am also studying to become an Nutritional Therapy Practitioner and keto coach. So, I’m learning new things, I’m off the truck and I’m looking forward to helping others have the similar health improvements that I was able to achieve. I have struggled with my weight since I was a teen, ballooning up and down several times in my life. I’ve tried many diets such as vegetarian, vegan, low fat and more, but I have never experienced more consistent or more quality health results as I have eating a whole food, nutrient dense ketogenic diet.

Some interesting facts about Yogi Parker: