After 7 (!) Thanksgivings spent on the couch with a pile of kitties, a pile of movies, a warm, fluffy blanket, and a pile of turkey and cranberry sauce sandwiches, Thanksgiving 2014 took a bit of a U-turn.  Yep.  It’s true.  There was more than one human in the house on Turkey Day this year.  Wild.  Wildman to be precise.  And there was also Loaded Twice Baked Cauliflower.

Like me, Wildman has no family anywhere close by except for his outrageously funny mother who is in her nineties and lives in a delightful retirement community just down the road.  Given that she has the capacity for not much more than an hour of exciting activity at a time, that left Wildman with about 12 hours to kill while most people were cooking up a storm with family and friends.  Being the good friend that I strive to be, I invited him to hang out – with the couch, the kitties, the movies, the warm, fluffy blanket, but without the pile of turkey and cranberry sauce sandwiches.  Wildman is embarking on his own adventure towards a healthier lifestyle, so I didn’t want to encourage him to derail just because it was a holiday.

Given that he would be having a turkey-fest with his mother mid-afternoon, I really only needed to provide one hearty dish of comfort food that could be consumed while movie-watching.  I remembered Wildman mentioning – while we were on a label-reading training session at Trader Joe’s the previous week – that he had never bought a cauliflower.  In his life.  I am sure you can imagine the reaction that he got from the girl that “favors strange vegetables”. 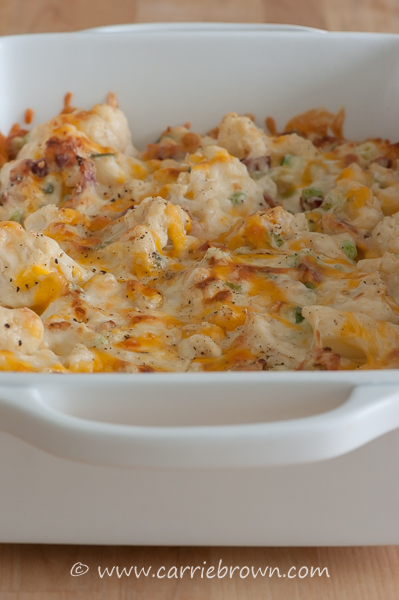 Thus it was an obvious choice when determining what to make to fuel the movie-fest.  It had to be cauliflower.  However, I had to ensure that his first foray into the world of white cruciferousness was a winner if he was to be encouraged to dabble in those waters a second time.

I’d seen several recipes for variations of twice-baked cauliflower floating around the interwebs, and it seemed like that might be a good entry point into the world of cauliflower.  So here’s my version.  I made it ‘loaded’ because in my experience anything with sour cream, cheese, bacon, and scallions added cannot possibly be bad.

It’s heavy on the fat – because we’re not afraid of fat over here – but if that bothers you feel free to use low-fat cream cheese and non-fat sour cream instead of the full-fat varieties.

The verdict?  Wildman ate 1 lb. of cauliflower on Thanksgiving. 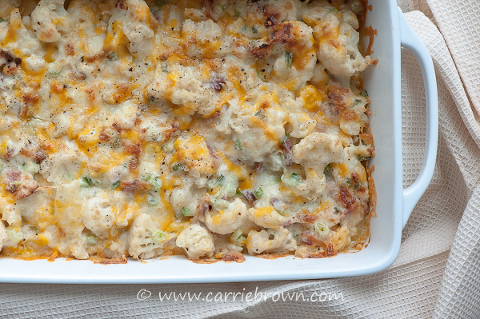