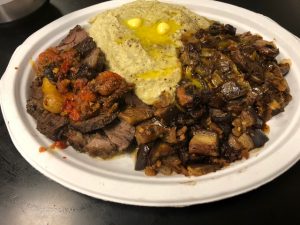 So, I was stuck at a terminal for a couple days for a class and physical, and decided to get out of the truck and increase my elbow room for some cooking.  I love one skillet dishes for their convenience , but sometimes you just gotta have a multi course meal.

I broke out my propane camp stove as well as an additional single burner butane stove to get this stuff done.  I don’t normally want to submit anything I have not made at at least a few times, but everything came out pretty well.
Eggplant Home Fries

Also on the plate: