They say three times a charm.  Well, for the second time this week I have had to turn up at a place 3 times before I finally got what I came for.  First the Grilled Cheese at Muir Woods (read about that saga a few posts back) & now Dottie’s True Blue Café.  What do they have in common apart from both being in San Francisco & both being infamous for great food?  They’ve both been featured on the Food Network.  Now, Dottie’s was on the list that a friend gave me of great breakfasts in San Francisco.  It was only when I went online to get opening times & directions that I realized it would be my second Food Network star that week.  Dottie’s appeared on Diners, Drive-ins & Dives.

And if I thought the wait for my Grilled Cheese at Muir Woods was long, I was in for a shock.  The line at Dottie’s is as legendary as their food. 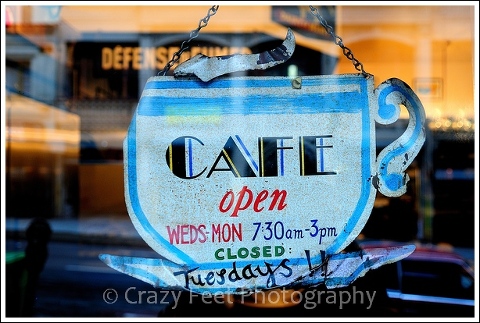 From my web surfing I knew a few things about Dottie’s upfront:

1.  Arrive early – there would be a long line no matter what day of the week or what time of the day it was

2.  The “Specials” are the items to choose from, not the main menu

3.  They are closed on Tuesdays

4.  The orange juice is awesome

5.  Everything is made from scratch, including the bread

6.  The Smoked Whiskey Fennel Sausage with baby spinach & mushroom Scramble is what breakfast dreams are made of

Dottie’s, Take 1.   Wednesday – snagged a free parking spot a mere 2 blocks from Dottie’s door.  Score!  Got there early & was the first in line.  SO excited!  Got to the door to read a sign that said:  “Pipe burst upstairs & we have no bathrooms.  We will be closed all day”.  Went to Sears Fine Foods.

Dottie’s, Take 2.   Thursday – could not find a free parking spot for miles around.  Had no quarters to feed a meter.  Could not find a credit card meter anywhere even vaguely close.  Got wildly frustrated & eventually gave up.  Went to Dynamo Donuts. 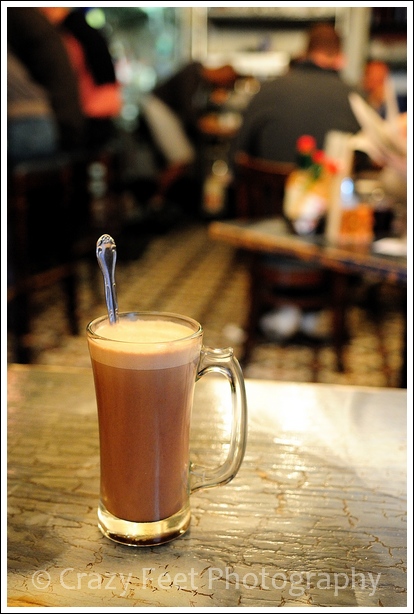 The staff at Dottie’s blew me away right out of the gate:  I was alone.  Dottie’s is {very} small.  They had a {very} long line of people waiting outside.  And yet, although I was first in the door they still invited me to sit wherever I wanted.  I sat at a table for 2.  They didn’t even hint that I should sequester myself away on a stool at the bar.  I even asked them if it was OK if I sat at a table.  They told me I could sit wherever I wanted.  Big gold star right there Dottie’s!  Way to make your diners feel important.  Even the single ones.

The hot chocolate was a step above wet & warm.  It had some flavor & some body.  What it didn’t have was half a canister of faked whipped topping bobbing on the surface.  YAY!!!

The service was altogether amazing.  And they have the nicest servers in the world.  They remember what position number you were in the line outside & take the food orders accordingly.  How they do that I have no clue, but they do.  Within minutes of opening the entire place was full to bursting & the line had already re-formed outside.  I wanted to be quick for 2 reasons – I needed to get on the road to start the 818 mile trek back up the I5 & I felt bad for all the people who didn’t get into Dottie’s on the first sitting.  So I quickly scanned the specials board, spotted the Smoked Whiskey Fennel Scramble & ordered it along with an orange juice.  The Scramble came with Cornbread, which I still need to get a taste for, so I swapped it out for the homemade bread of the day, which happened to be Buttermilk & Dill Toast. 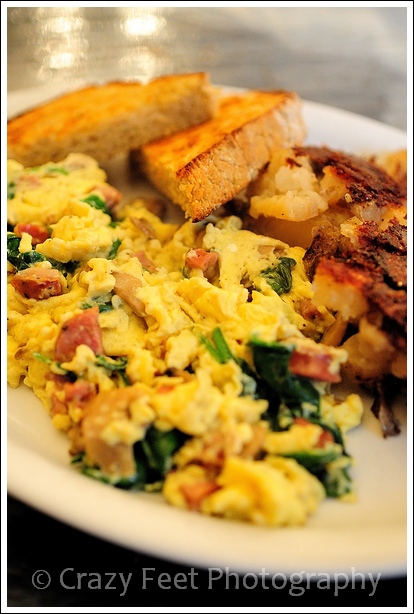 My food arrived in really short order.  The bread was fascinating.  The flavor was strange & beguiling & delicious all at the same time.  The texture was definitely homemade & a little on the heavy side for me.  The orange juice was outrageous.  I swear they must have an orange grove out back.  The Scramble?  Truly it was the best scramble I have ever eaten.  The whiskey fennel sausage absolutely rocked.  Miss Kathy certainly needs to try this sausage out!

The decor, I was sure, hadn’t been touched in 50 years.  This only adds to the appeal.  And when I got up to leave, the owner (who I am certain was wearing the same apron he wore the day he opened the joint back in 1863) came dashing over to thank me for coming to Dottie’s for breakfast & to wish me a safe drive back to Seattle.  How NICE is that??!!  As I trotted out the door at 8:20 am to begin my long trek north, I noticed that there were another 60 people snaking down the sidewalk.  Wild.

So; my take on the enigma that is Dottie’s True Blue Café?  GO!  Just go early or be prepared to wait.  This is one San Francisco institution that you should not miss.