A month or so ago I sent a note out to my whole team asking them each to send me an email telling me their 4 favorite flavors of ice cream, with the promise that when we were all together in one place in January I would make them the top 4 voted flavors.  Within literally 10 seconds of pushing <SEND> I had an email back from The Boss (he’ll hate that I called him that…he doesn’t call me a PITA for nothing :-) ) with one word contained in it: CAROB.  Since I was pretty sure there’d be no more votes for carob (who even knows what carob is anyway?), I kinda pushed it to the back of my mind.  But it was still there lurking.

As Team Week drew closer the word CAROB appeared to take on a life of it’s own inside my head, popping up in the middle of the drive to the office, shouting “Hello!” during trips to Trader Joe’s to gather a gazillion eggs & their entire delivery of heavy cream for the day.  It cooed at me while I was drifting off to sleep & was still there cooing in the morning when I woke up.  I tried to quieten it by telling myself (and The Boss) that I couldn’t possibly make all the ice cream for the team AND carob ice cream for him in the same week.  He would get his Carob Ice Cream, just a few weeks down the road.  But as the week passed by in a blur of ice cream custards & whirring churners and I got nearer and nearer to filling the freezer with all the ice cream for our fabulous sales force, it became harder & harder to rationalize it away.  Made even harder by The Boss telling me that Haagen Dazs used to make fantastic Carob Ice Cream 20 years ago & he has been missing it ever since.  Incidentally, while I was searching for a recipe online it seems that there’s a whole nation of people lamenting the long-ago demise of HD’s Carob Ice Cream.

So Friday found me scouring the web for carob ice cream recipes (of which I found exactly none) & then wandering the aisles for both carob powder & carob chips down at PCC Natural Market. 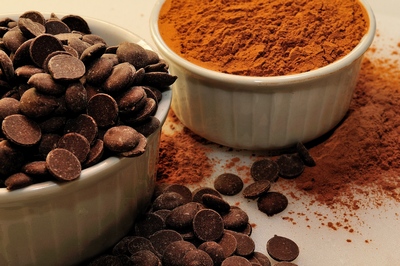 I had no reference point for this ice cream with no recipe & no idea what it *should* taste like.  So I was left with no choice but to just wing it.  Here’s what I came up with.

Sling the cream, carob powder, sugar & salt in a saucepan & stir until the sugar has dissolved.  Bring to the boil & simmer for 1 minute, whisking constantly.

Remove from the heat & add the carob chips.  Stir until the chips have melted completely.  Carob tends to be a bit sticky (and the powder doesn’t dissolve too readily) so this will take more stirring than chocolate chips.  When the chips are completely melted, pour the mixture through a fine sieve into a bowl in order to catch any chips that haven’t fully melted & any powder that hasn’t dissolved.  You will be left with a pretty gooey sieve, but that’s OK.

Add the milk & the vanilla extract to the carob cream mixture & stir well.

Pour into a blender & blend for several minutes.  I went off and loaded the dishwasher at this point.  Blending definitely helped with adding body & smoothness to the mixture, so I don’t recommend skipping this step even though you will have a blender to wash up afterwards.  Just do it. 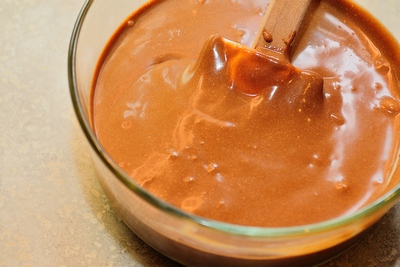 Cover and chill the carob cream mixture thoroughly in the ’fridge (overnight is good), then freeze it in your ice cream maker according to the manufacturer’s instructions.

Find someone who likes carob.

For me, finding someone who likes carob was the easiest part of the recipe.  When The Boss first asked for Carob Ice Cream over a year ago I seriously thought he was just being funny.  He’s a very funny chap.  So I never made it for him.  Turns out The Boss really does love carob.

cb:  “Really?  I was worried about the slightly grainy texture”.

The Boss:  “Oh WAY better than the Haagen Dazs”.

So, in the end I exceeded at the Carob Ice Cream Commitment after all.  And to think I lost sleep over this ice cream.  If you like Carob & you like Ice Cream, you might want to try this one out.  Apparently it’s really good.